Essential 6 Moving Off Your Leg On the Ground

Getting your horse to move off your leg (or move laterally) is key to getting control of his whole body. Lateral control of the hind end and shoulders helps you in simple things, like opening and closing gates or backing in a straight line. It also makes possible more advanced maneuvers, like changing leads and spinning. 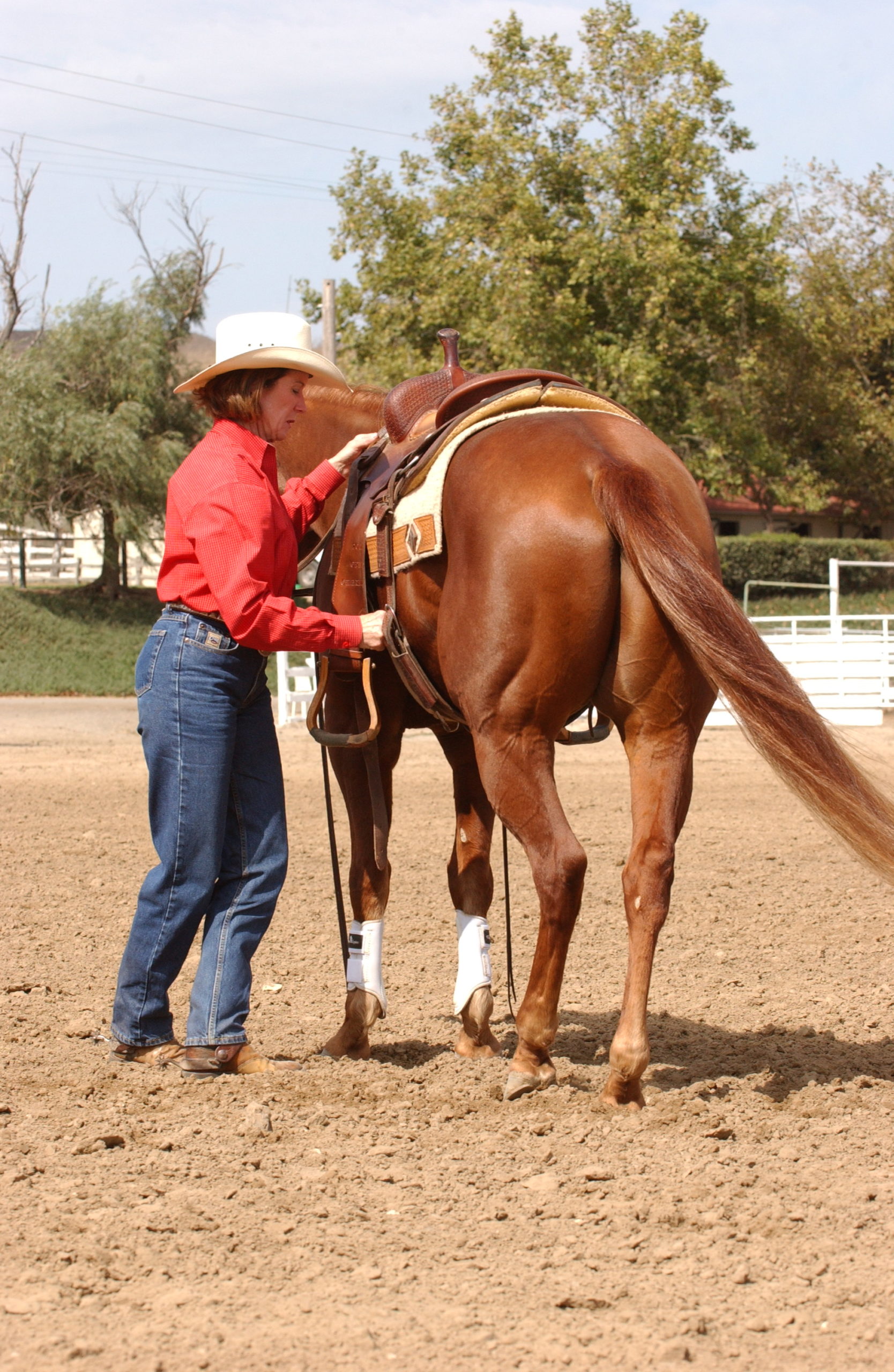 Horses naturally move into pressure, so young or green horses must be educated to move away from it, instead.

Ultimately, lateral control will enable you to “leg-yield” your horse diagonally across the arena at a lope–resistance-free, body straight, front legs crossing over each other. It will also help you execute a perfect sidepass, such as moving sideways down the length of a log, as in a trail class, and will help you with a beautiful spin.

For now, however, we’ll be satisfied with any movement sideways in response to leg pressure; the more refined lateral control will come later. In these exercises, you’ll ask your horse to move his rear end over as you stand next to him (at the hitching rack and then as you hold his bridle reins) and while you’re mounted (maneuvering him next to a gate to open it, sideways along the fenceline, and finally diagonally across the arena).

In the movement at the gate and along the fenceline, and in the more advanced maneuver diagonally across the arena (leg-yield), he’ll move first his front end and then his hind end separately at first. Ultimately, he’ll move both ends simultaneously in the leg-yield.

Here’s how: at the hitching rack. Practice this one whenever you’re grooming your horse. (NOTE: If there’s any chance your horse will pull back, untie him before conducting this lesson.) Stand at your horse’s side, and use a sweat scraper, hoof pick, or other hard object to create pressure (that is, mild discomfort) right where your heel presses on your horse’s ribs when you’re mounted. Your aim is to have him respond to the least amount of pressure possible, so start softly yet insistently. Don’t start with a jab.

The instant he takes one sideways step with a hind foot, stop and praise him, then ask for another step. If he resists, increase the pressure gradually in a push-and-release movement until he takes at least one step, always looking to get response from the least amount of pressure, and praising him the instant he responds. If need be, you can also pull his face towards you slightly as you ask him to move his hindquarters over.

Now go to his other side and ask him to step in the opposite direction, using the same cues. Repeat frequently from both sides until he responds willingly to mild pressure.

In hand. With your horse wearing a saddle and bridle, stand next to him, holding the bridle reins in your left hand and using the sweat scraper, hoof pick, or your thumb to create pressure, again just behind the cinch where your heel would normally be. By now, your horse should respond with a sideways step even as you use the bridle reins to keep his head straight. Strive to get him to move just his hind end over. We’re “disengaging” the hind end. You’ll want to be sure he’s good at this, as it’s the underlying secret to the emergency stop.

Switch hands and repeat from the other side.