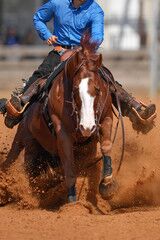 It was a chilly and wet day in South Texas. So I decided to take a trail ride.

I was thinking about what separates people regarding those who maintain confidence and succeed, and those who don’t.

This article has the tales of two athletes that tell that story.

I heard a story when I first went to a seminar at the Human Performance Institute in Orlando, Florida.

It was about a young tennis star who had come there for ‘mental skills’ training. And she went to the right place because HPI is where they train Olympic and Professional athletes how to perform under intense pressure.

When she arrived, she was 50th in the world standings. She studied and was coached… and within a relatively short time, she rose to #1.

And then, she thought she had the mental skills thing down pat and stopped training in them. Within an even shorter time, she fell back to 25th in the ranking.

There’s always another layer to learn and to apply to all kinds of situations.

Great riders in the arena are often separated by their desire to keep polishing and polishing their skills… and also envision what’s possible for them. They also keep at it. They don’t think they’ve arrived. They don’t compare themselves to other riders, either.

Here’s another great example. I live in a football world at my house this time of year, but because I’m not a football fanatic, a lot of things wash right over me.

But I did hear an interview with a famous quarterback who has one of the best winning records in all of football. They asked if he was excited about a win that just happened. He said, “Yes, but what I really want to do is get back and review the video to see why I missed that one pass.”

He didn’t say it in a self-defeating way. He truly wanted to figure it out so he could get better. His whole approach was to keep happily studying and polishing. He did own his greatness, and he did love the results of his team, but he was all about putting together all of the pieces of the puzzle… and getting better and better.

You see, the tennis player didn’t have that mindset … the way of thinking and feeling that the quarterback has… at least not at that time of her career years ago.

I’m not being critical of her… I’m just saying that one of the things that separates everyone, including riders, is a desire for excellence, perseverance, and understanding that it’s a forever journey to keep growing.

And if you do this with what you love… like we love horses… it’s a blast.

How you think and feel about yourself, your riding, your horse, and other people are skills that can be and need to be practiced. Those who practice them indefinitely, separate themselves from others.

Leave a comment for me. Do you think that excellence, perseverance, and loving your journey are good ingredients for a great recipe for fun and success?

And by the way, because part of excellence is learning about your horse and being relaxed… connection with him or her happens all by itself when you study these skills.

I totally agree with you that growing is a forever journey that we buy into. I think part of loving your journey is being happy and it helps to be happy when you are enjoying your time with horse, and pursuing our goals, that desire for excellence certainly gets us closer to that happy spot.

I Love this! Thank you! It truly is a “mental” game, almost more than the physical aspect of the game itself!

I show American Ranch Horse and had my horse with a trainer who said she could help me improve my horses stops and spins. We both happened to be going to the Midwest Horse Fair that year and I was excited about a number of the clinicians that were going to be there because I have a passion to improve my horsemanship. She told me she doesn’t go to watch clinicians because she felt her methods worked just fine for her and they all just talk about the newest craze in horse training and she wasn’t interested. I told her… Read more »

This is a great read for riders of any level! I find myself doubting my skills in the Non Pro, competing against some really top notch competitors and horses. It takes energy and effort to focus on maneuver by maneuver what I can fix with my horse and where I can let her skill shine. Thanks Barb and Sandy!

I enjoyed reading this and I sometimes ponder why some coaches (was thinking about basketball in particular) are able to create greatness out of teams when other coaches with almost the same exact players are not able to do that. I think it is related to the ideas in this article, at least in part. Thanks!

Such great advice thank you.

OMG Barb!!!! Great article. So much to think about. I can’t wait for the riding confidence class to start. I am so ready to keep improving. Love you!

I love this. How thoughtfully and respectfully put. Thanks for sharing!