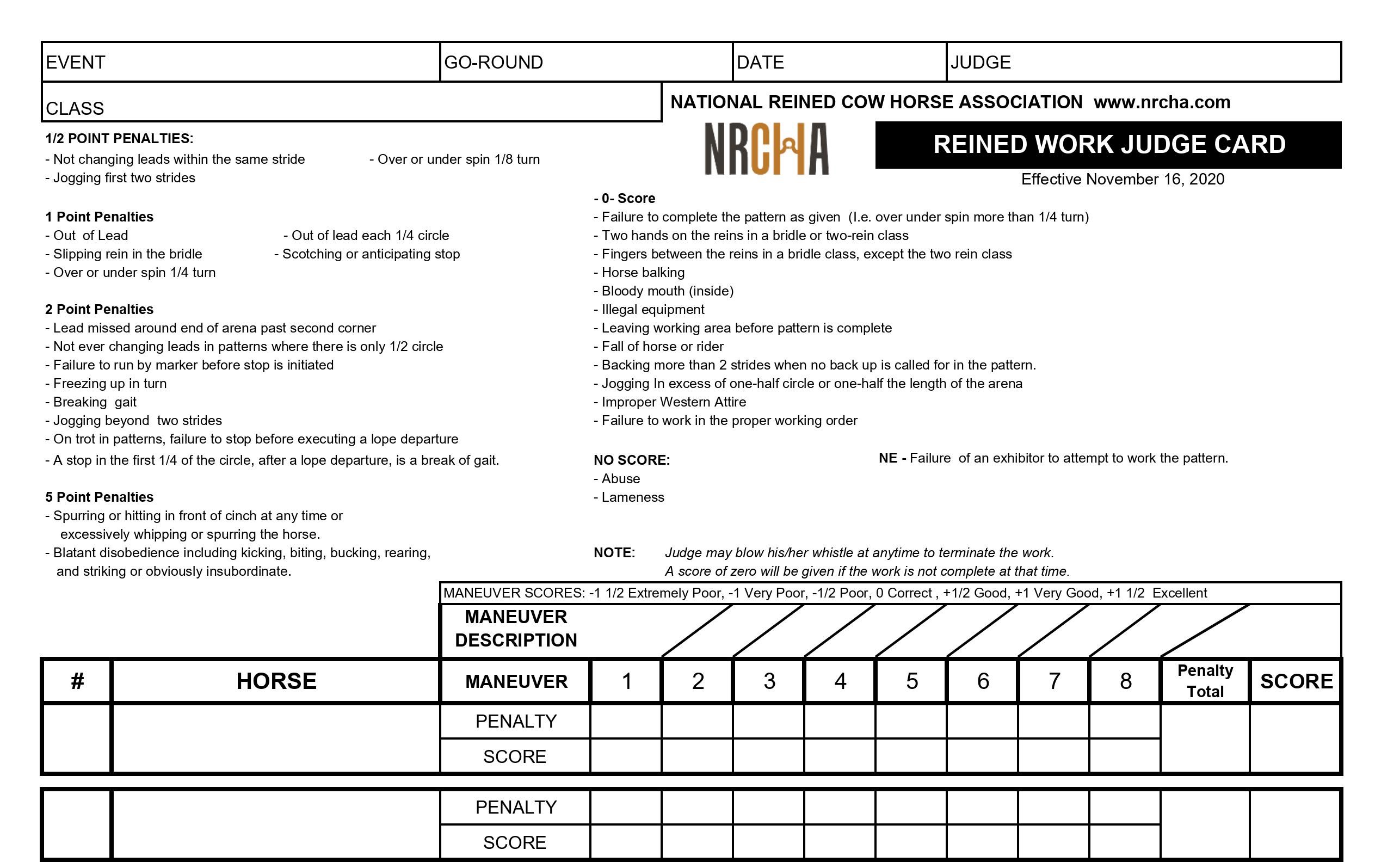 The NRCHA uses the NRHA penalty system with an exception for the “scotch” on the approach to the stop. The NRCHA has this penalty, but the NRHA doesn’t.

Horses are required to be on the correct lead throughout the circle maneuvers.

Circles are divided into 4 equal quadrants. For each quarter circle a horse is out of lead, it is a 1-point penalty.

If a horse goes further than ¼ circle, it’s another 1-point deduction for each quarter circle. In the small slow circles, the quarter circle is small and the number of strides will be less to get a 1 pt penalty.

If a horse missed a lead for ¾ of the circle, it would be recorded as a penalty “3”, versus one that fell in and out of lead 3 times which would be a penalty 1,1,1.

The hardest 1-point penalty is when a horse falls out of lead for only 1 stride. It happens so fast, that it is commonly missed.

Being a few strides early or late on a lead change is also a 1-point penalty. Leads must be changed cleanly in within a stride or 2 of the center for credit. If you’re not certain if they’re too early or a bit late, just come down on the maneuver score.

The scotch can be another tricky one. There is seldom a “yahtzee” on scotches. A “Yahtzee” is when everyone makes the same call. For the scotch penalty, the horse must assume the stopping position and has to be asked to continue forward to the stopping area. When a horse anticipates the stop, but doesn’t achieve the position, it bring the maneuver score down, but isn’t a penalty. The scotch should be obvious, otherwise average the poor approach with the actual stop for the maneuver score.

Over or under spinning 1/8-1/4 is a 1 point penalty also. It can depend on where the judge is sitting, whether it is called or not. Consistency is what’s important with the 1-point penalties and they are very meaningful in how the horses place.

The last one is slipping the rein. That means that 1 rein is being held shorter than the other. If the horse’s head is exaggeratedly tipped to the inside of the circle or spin, the judge should look for the telltale “bubble” in the reins. If you don’t see an obvious one, don’t take the penalty.

It’s important not to get negatively biased and hunting for penalties. If they jump out at you, record them, then decide how much it should affect (or not) the maneuver score.

Consistency and fairness are what makes a really good judge and that requires lots of focus!

I am enjoying this article… we, as non pros often wonder about the penalties points… why you may have a penalty point from one judge and not the other..
Thank You for all the info you both share with us!!
KellyD

Glad it was helpful Kelly!

Thank you for a great explanation! It’s honestly the best one I’ve come across. In my ranch reining, I occasionally get a 1 pt penalty on my circles, that are otherwise receive a 0 maneuver score. I was at a loss as to what it could be, and just assumed I had accidentally slipped a rein. Sometimes those large diameter romels in small hands can be tricky! Reading this I now realize my lead changes could have been early or late, which is more likely for me. Thanks for the learning moment!

Hi Sandy and Barb. I love your articles on all things cows and cow horse. I am curious of your thoughts with the 1 pt penalty as it pertains to the VRH Ranch Reining. There are two such penalties; (1) if the horse is out of frame (per maneuver) and (2) if the horse is over bridled per maneuver. To me, I use my maneuver score if either (1) or (2) bothers me. What do you think? Thank you, Chris

Hi Chris,
Great question! Unless it really offended me, I would also use the maneuver score for those 2. I find that I do that a lot with the 1 point penalties that have grey areas so I don’t have to justify them later watching a video (which sometimes looks worse than real life, but just as often makes things look better.
Sandy

Thank you Sandy, It’s easier to read your information than to read the small print in the rule book–:) There sure is a lot that the judge has to look for and “see” quickly in order to consistently score a reining run. Thank you again for the information. 🙂

Hi Carol,
That’s for sure! It’s a lot to take in, process, and decide on a score quickly esp the fence work!
Sandy