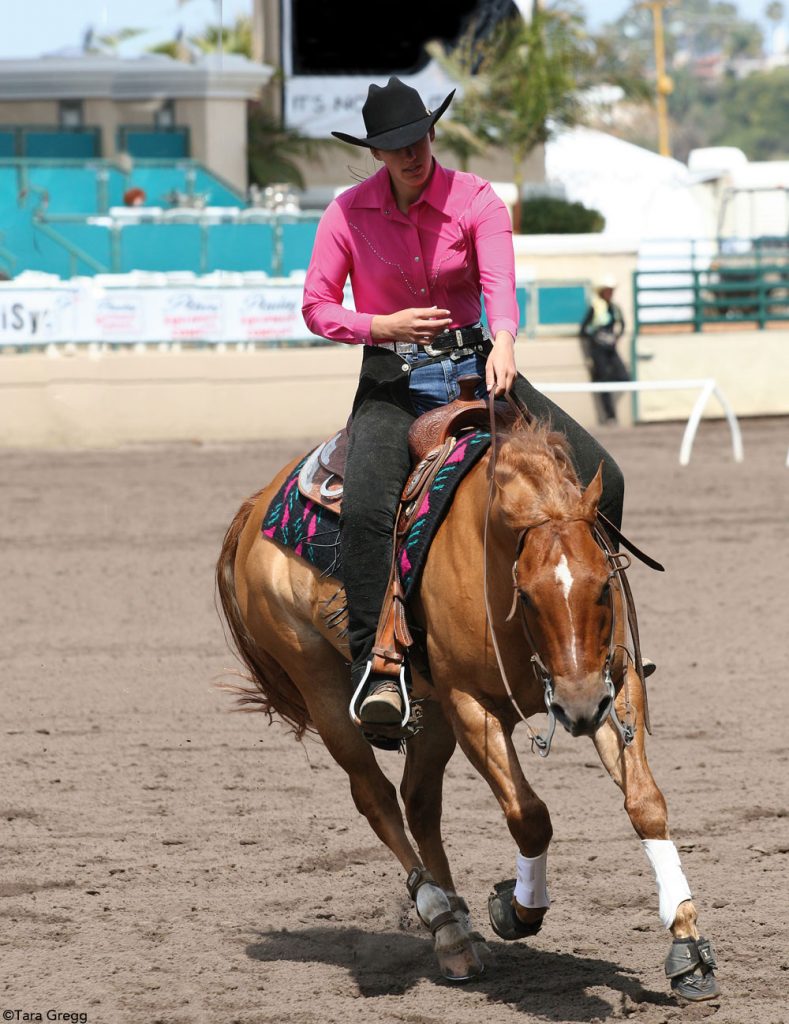 If there’s a lot of interest, I’ll continue with penalties in the other events.

Now, if you are cross cantering down the arena for your rundown, you probably won’t be in a credit situation even if you stop well, because the approach to the stop wasn’t great if you were on 2 different leads.

Failing to run by the market before initiating your stop is also a 2-point penalty. Unless the tractor driver accurately cross-dragged at the marker, it’s very difficult to tell. It’s also difficult to review, as the video is dialed in on the rider and you have no real reference points.

The rule states “failure to run by the marker before initiating the stop.” If a horse hits the ground a few times while stopping and the first of those skips or bumps is before the marker, then technically it’s a 2-point penalty. Getting past the markers is one of the only things you can control in your run, so make sure you get past the marker before you start to stop.

Freezing up in a spin means that either you or your horse quit spinning before the last quarter. If that were to happen during the last quarter of the spin, it would just be a 1 point or ½ point underspin penalty.

Breaking gate can happen anywhere in the pattern. It most frequently occurs during the lead change or when slowing from the big fast to the small slow circle. It also can happen if the horse lopes off on the wrong lead and breaks while the rider is trying to get changed. Sometimes if a horse slips out of lead behind and the rider doesn’t keep the horse moving as they try to get the hind lead caught up, then a break may occur. A break is defined as “the cadence of the lope is disrupted or not maintained and only occurs while loping.”

Jogging beyond 2 strides also incurs a 2-point penalty. The steps of the hind feet are usually counted when reviewing a jog off. When you count 4 steps and then there’s a fifth or more, the 2-point penalty is assessed.

BTW, when reviewing if a horse backs too many steps, it’s easiest to count the steps of the front feet, whereas the hind feet are counted if it’s a trotting penalty.

On a trot in pattern, if the horse doesn’t stop before executing the lope off, the 2-point penalty is incurred.

And last but not least, if a horse stops in the first quarter of the circle after a lope departure, it’s considered a break of gait. If it happens anywhere else, it’s considered adding a maneuver and is a zero. This is because sometimes when a rider lopes off on the wrong lead they’ll stop and ask for the correct one. A case of muscle memory!

To incur less penalties, if that happens, keep loping and do a lead change. If you do that, it’s only a 1-point penalty as long as you accomplish it in the first quarter of the circle.

That’s it for 2-point penalties and a few miscellaneous ones.

When you’re first starting to show or are trying to get together with a new horse, just try to stay out of the penalty box. If you can have a clean run with no penalties, that’s a 70, and 70 is a good score.

As you get more confident, you can work on crediting maneuvers.

Let me know what you think.

Better desciptions than the rule book. Thanks for explanations on why and how its judged to make it clearer.

Oh thank you so much. It sounds so easy, but….. I have at the moment a major problem with my horse (only with my horse not with horses from Al Dunning or Brad Barkemeyer). My horse always picks up the wrong lead when I want to go to the right lead. I do not know, if I do it wrong or what happens. It is a new habit of my horse….. a bad one. When I do a roll back it works properly but not otherwise. I wish I could join a clinics with you, but most of the time… Read more »

Is this for reining or NRCHA reining?

Your articles are detailed and thorough. Thank you.