Essential 6 Moving Off Your Leg While Mounted

In the last article we worked on teaching our horse to move away from pressure while he was tied at the hitch or wash rack, and while leading from the ground.

Now, let’s mount up and see if we’ve laid a good enough foundation. 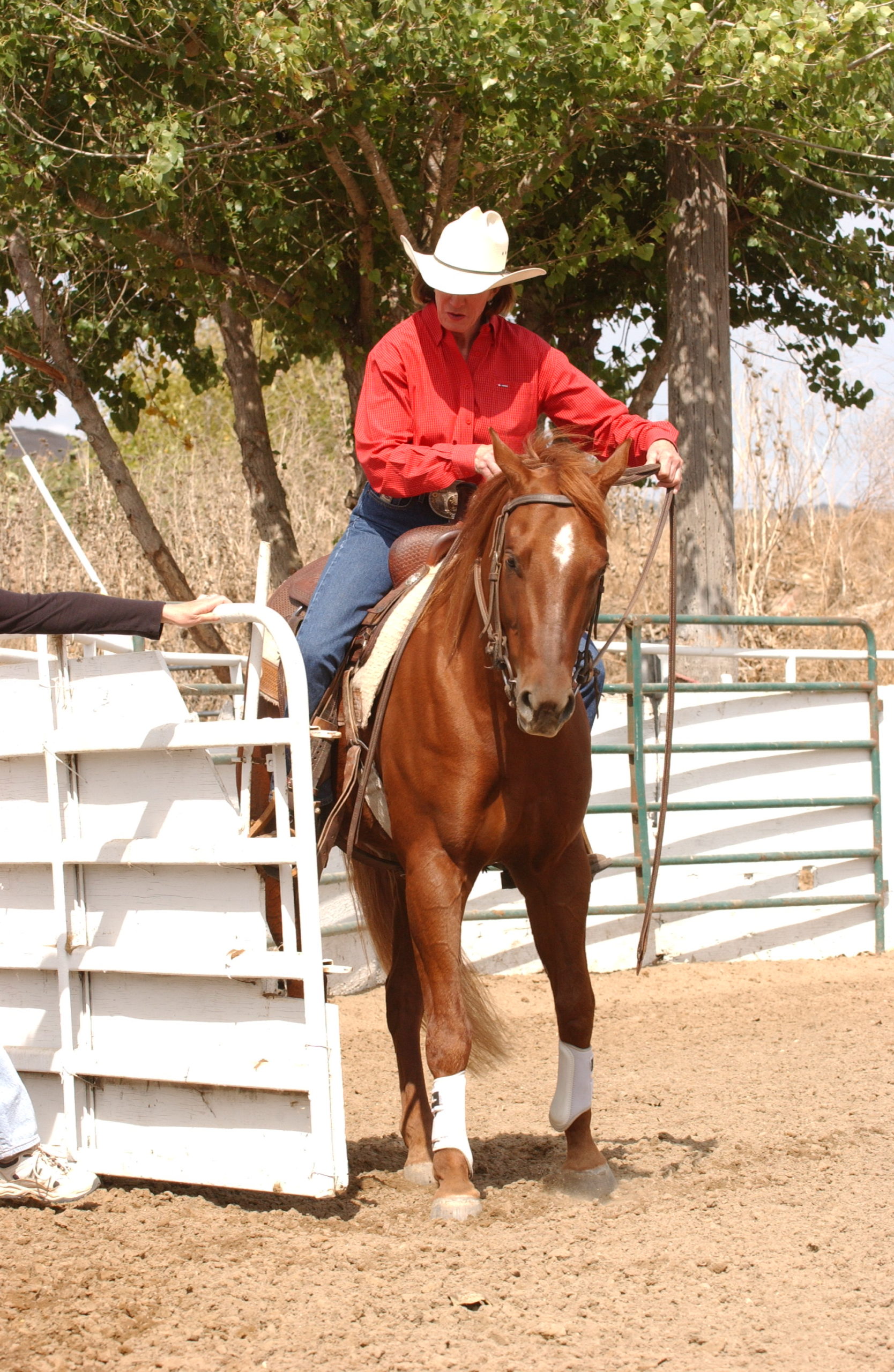 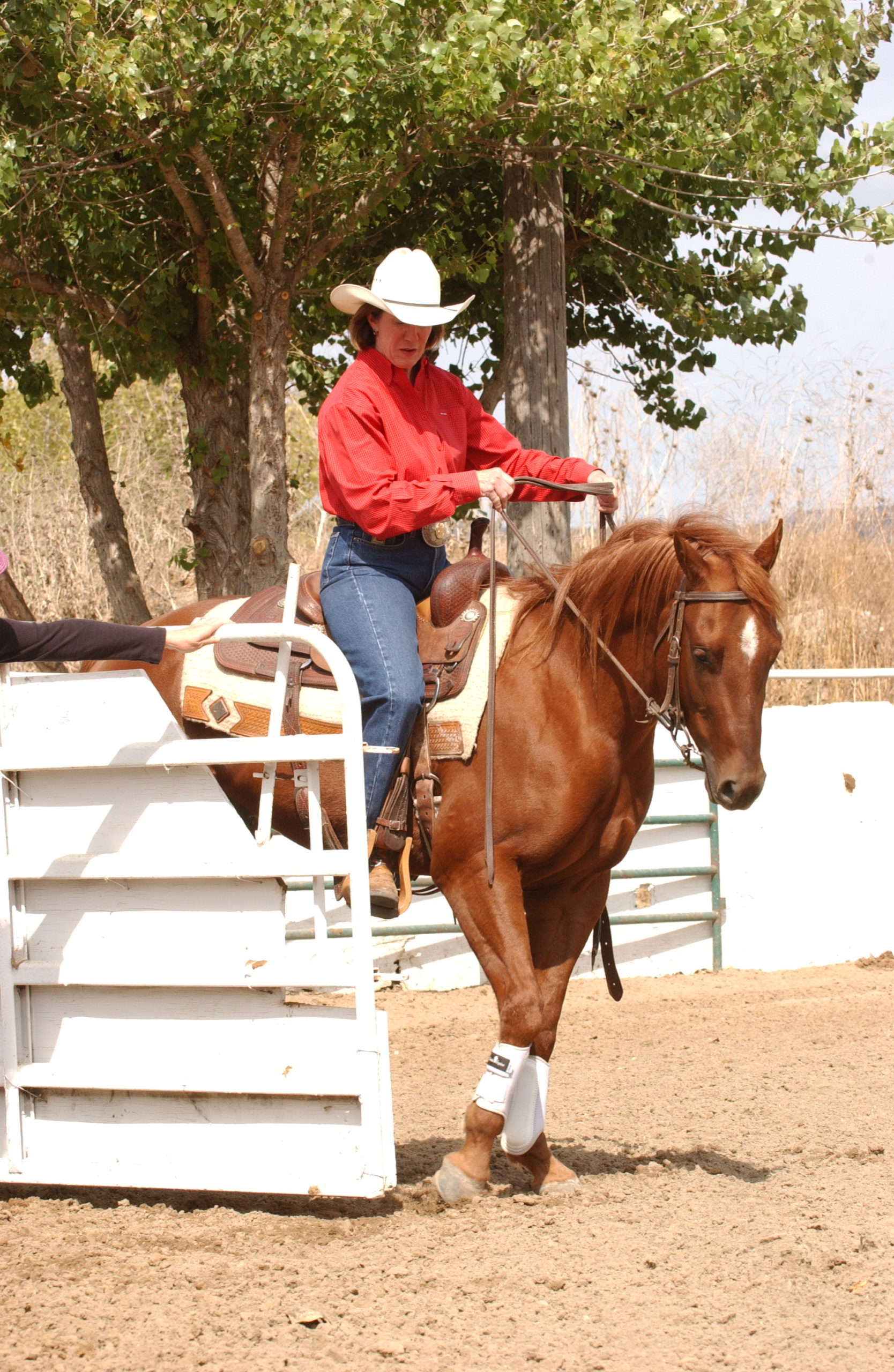 Opening a gate. Now mount up and see if you can move both his front end and his hind end in order to open a gate. Ask a friend to move the gate manually, so you have both hands free to use your reins to influence your horse’s body.

Line your horse up parallel to the gate. Have your friend push it open a bit toward you as you ask your horse to step sideways with his front end, away from the gate, by carrying both your hands away from the gate while using the foot nearest the gate at the cinch to encourage his shoulders over.

After he takes one step with his front end, apply pressure with your gate-side heel in the same spot as you did with the sweat scraper to move his hind end over a step, too. If he resists, bump with that heel behind neutral position until he takes the step. Go back and forth in this way, moving his front end, then his back end as your friend opens the gate a little at a time. Try to stay parallel to it and move with it until it’s open. Then sit there next to it and make that the good spot.

Be sure to work in both directions, so your horse is side-stepping both ways. Then try to do it without someone moving the gate for you. Then, reverse all the cues to teach your horse how to close the gate. Take as long as you need to master this step before you move on to work at the fenceline.

At the fenceline. Still mounted, position your horse so he’s facing into, and perpendicular to, a safe fence (nothing he can catch his front feet in or get his head over). Ask him to move first his front end one step to the side, and then his hind end, then his front again, and so on, so that he’s moving sideways down the fence.

After he’s taken one sideways step with his front end, use the same leg to ask his hind end to move, only this time bumping a few inches behind neutral position.

Throughout, adjust your reins as necessary to keep your horse’s neck straight and roughly perpendicular to the fence. When he can do it moving freely, front end and then back, try to move his whole body at the same time. Get this down well before moving to the next exercise.

Diagonally across the arena. Starting in one corner of your arena, ask your horse to walk forward and sideways diagonally across to the opposite corner, moving first his front end, and then his hind end, then the front again, and so on. Let’s say you’re in a right-hand corner, and will move him diagonally to the far left-hand corner.

Squeeze with both legs in neutral position to send him forward, then to move his front end to the left, bring both reins toward the left and bump with your right leg at the cinch.

Then keep forward motion going with a squeeze from both legs, and to move his hind end over, bump with your right leg a few inches behind neutral position.

Then repeat the sequence, working your way diagonally across the arena. For every step forward, you’ll move one step sideways. As your horse comes to understand better what you’re asking, work toward getting him to move both ends at the same time in a true leg-yield. You’ll be carrying your hands to the left, and using your right leg in neutral position– just behind the cinch.

Reverse all cues and work in the opposite direction. Be sure to provide equal practice going each way.

When your horse is responding consistently well at the walk, try it at the trot, and eventually the lope.

Forgot to say I love Sandy’s descriptions they are really great! Miss you girls.

The walk I can do pretty easily and the trot takes a little more practice and control however I cannot seem to get the lope as I alwasys seem to go more straight than sideways, did I understand correctly.,
Is there any tips on how to do this maneuver and maybe what it should look like?
Is it demoed on any of Sandy’s videos? Thank you Paula