Your horse’s willingness to stop when you say “whoa” is essential for control and basic training. It also provides the foundation for one of reining’s most thrilling maneuvers, the sliding stop. But first, we’ll have to be satisfied by an attempt from our horse, at ceasing forward motion. It’s not going to look anything like the stop we’ll need in competition, where the horse is balanced, off the bit, driving from behind with his back round and his head low, gliding into the dirt (I get goosebumps just thinking about it!) 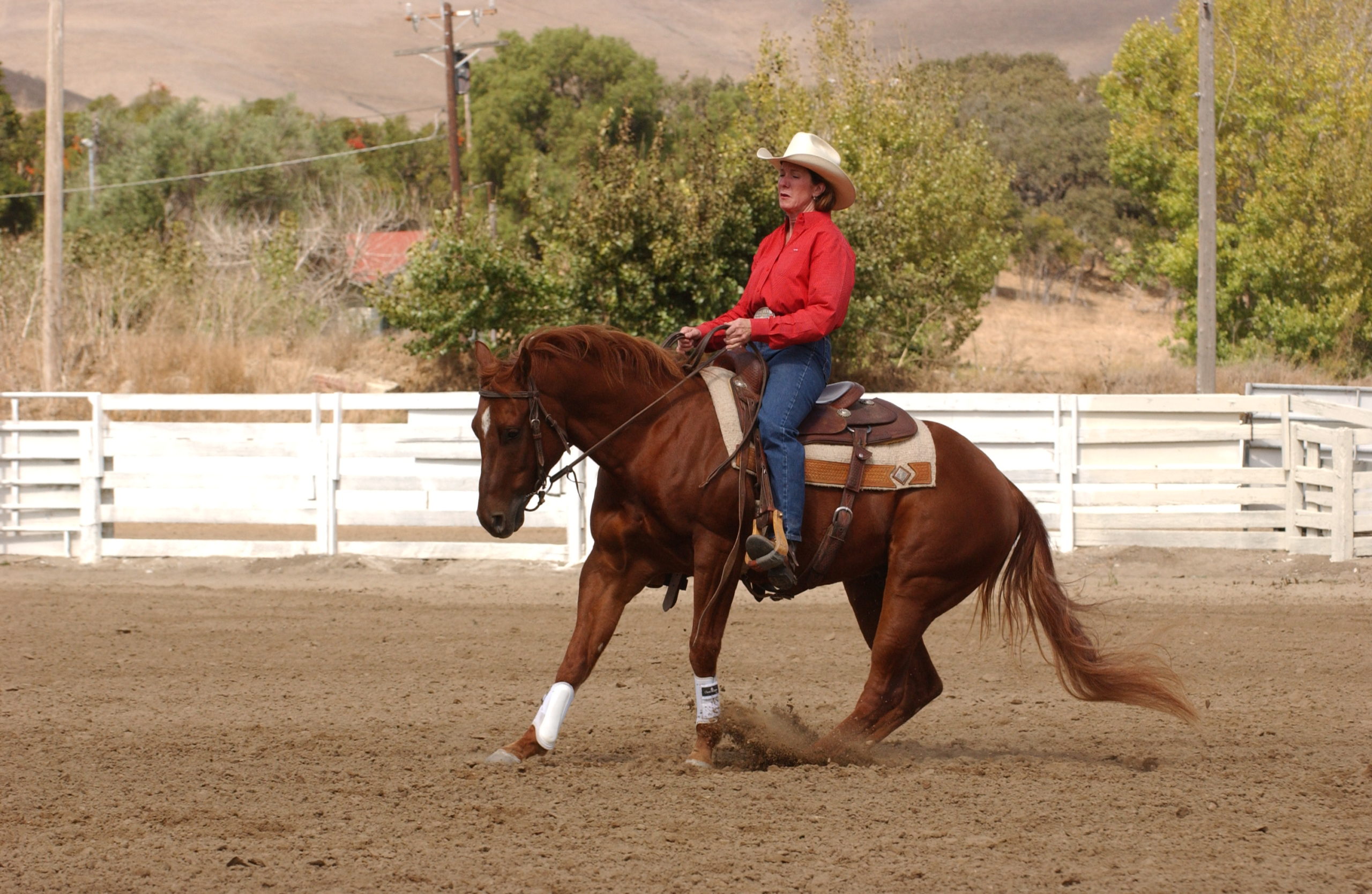 But all things in good time. The key thing now is to get your horse to love and even crave stopping. That means don’t make it uncomfortable for him. Make it as easy as possible for him. Set him up for success by making sure he’s a little tired and wanting to stop, then aim him toward a wall or a corner, if need be, so he has a visual barrier. This is much preferable to trying to force him to stop by overpulling on the reins, which he doesn’t understand yet anyway. Then exhale, sit down and say “whoa,” get stopped, then praise him, and let him sit for a while. Enjoy the scenery!

True story: One non-pro I coached had to take a lot of cell phone calls while he was riding. Whenever his phone rang, he’d stop and answer, sitting and talking for a while. Well, it didn’t take long before his horse started doing these really nice stops at the first ring! Horses remember the very last thing they were doing before the reward. This horse knew the ring meant there was a nice sit-a-spell coming right after his stop, so stop he did!

The goal. When you sit deep, exhale, and say whoa, your horse will come to a comfortable stop on his rear end, then back a step, all preferably without your having to pull on the reins (although you probably will need to pull in the beginning, until he understands).

Here’s how. Prepare to make stopping your horse’s idea (remember: make the right thing easy!) by loping him until he’s a bit tired and thinking about wanting to stop. As you lope, work on getting him soft in the face by using both your legs in neutral position to drive him into your hands. Work on circles, asking him to bend by using pressure or bumping from your inside leg in neutral position. Get him all softened up.

When he’s ready to volunteer to slow down (you’ll know because you’ll have to keep pushing to keep him loping), ride him onto a straight line toward your arena wall or a corner. You’re going to ask for the stop when you’re about three or four strides from the wall or corner, so give yourself enough space to be able to straighten him out before you get to that point.

Don’t worry about exactly where his feet are (from all those books you’ve read); if you exhale, then say whoa, you’ll be asking in the right part of his stride to make it work.

So, when you’re about three or four strides from the wall or corner, just when he’s starting to wonder which way you’re going to go, take a long breath, exhale as you sit deep in the saddle, and at the end of the exhalation, say whoa in a low, smooth, authoritative voice. (If your voice is tentative, abrupt, or too drawn-out, it will be less effective in commanding attention and getting a response.)

As you finish saying whoa, count “one, and, two” to yourself, and if he hasn’t stopped by then, pick up the reins and, using the least amount of pressure that’s effective, get him stopped. Then back him up a step, then relax and praise him as you let him stand and rest a bit.

Keep in mind that it’s OK to pull on him a little to get him stopped, as long as you always give him a chance to stop before you pull. If you pull at the same time as you say whoa, he’ll never learn to stop just from your voice. (Plus, it can cause him to stop abruptly and in the wrong part of his stride, “dashboarding” you, his driver.)

Also, be sure to give him a long enough break after the stop so that he knows he’s being rewarded. Watch to see that he relaxes (drops his head, exhales) and licks his lips—a sign that he’s “processing” and is OK with this new information he’s just gotten.

Above all, don’t let your horse subtly call the shots on where to stop. In other words, don’t avoid stopping in places where he doesn’t want to (like when you’re loping towards the barn). Also, don’t let him “volunteer” to stop at his preferred spots, such as by the out gate or near other horses. Insist that he do so at the places you’ve chosen.

Otherwise, you’re letting him train you. And that’s never a good idea!