I thought it might be a fun change of pace to explore the myth vs fact of sworls in our horses.

Sworls are pinwheeled patches of hair that grow in the opposite direction, on the face. On other parts of the body, they are called cowlicks.

Interestingly, the brain and hair are created at the same time, from the same embryonic layer, so there appears to be some science in the correlation of the two as it relates to fear response and trainability.

The consensus of opinion is a sworl located right in the center of the forehead, between the eyes is a tractable, uncomplicated horse.

Below the level of the eyes, can make the horse a bit harder to train, but can indicate intelligence, tending to mischievousness.

Higher than the eyes is fine. 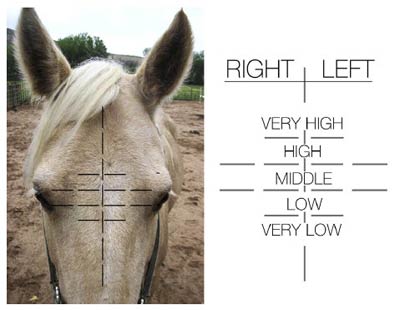 2 sworls, if close together and center, is still ok but might tend to be a bit more reactive, yet indicative of high performers. (If they are further apart, it’s not a good sign). It is twice as common to find double sworls in racehorses and show jumpers. They are generally more complicated and higher strung. 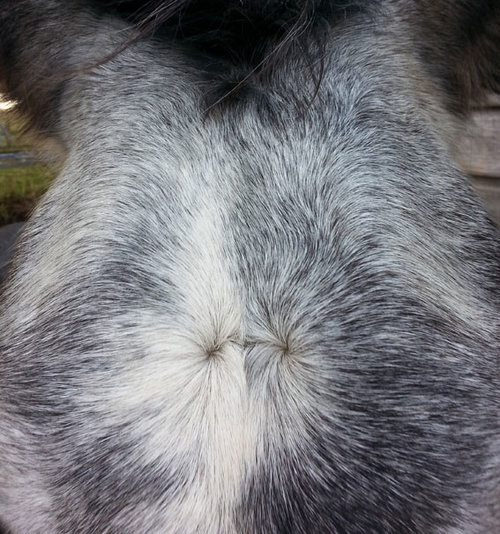 A single long sworl between and extending to below the eyes is a friendly agreeable horse. Check out pictures 1 and 4 in the chart below. 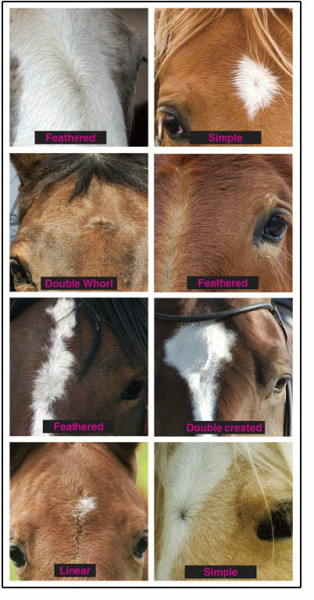 They also make their appearance on the neck.

Up high on the neck within a few inches of the poll, especially if there is one right across from it on the other side makes a horse easy to flex.

However, if they appear further down the neck or only on one side, they won’t have the same neck flexibility. I have definitely found this to be true. 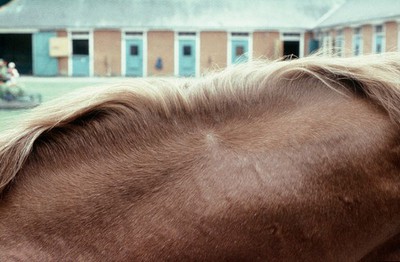 Multiple sworls on the body are signs of an intractable flighty nature.

They can often be found on the left of center on the face.

This usually indicates a horse that’s more complicated, but trustworthy.

I read an account of a farrier who found that off-center sworls indicate stiffness on that side. It was harder for him to pick the horse’s feet up on that side, so it would make sense that training one would be harder also.

They can also go clockwise and counterclockwise, though I’ve never seen much information about what that means in terms of tractability.

The Bedouin’s also put great stock in sworlology. They used them for identification, because like fingerprints, because are unique and never change.

Sworls have also been studied in dogs and cattle, as indicators of temperament.

Look at the photo below and tell me what kind of temperament you think this horse with a wide, loose sworl might have. Then, check your horse’s sworls and see if you find any of this to be true.

I’ll sure be interested in hearing from you about your findings! 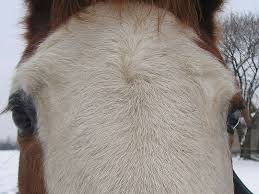 Fascinating topic.  I’d heard of it, but never really thought about it.  I have looked at my horses and their sworl(s) several times over the last few days.  My retired mare has one sworl in the middle of her forehead between her eyes.  She is a very tractable, uncomplicated horse.  She is kind, very responsive, easy to take anywhere, and has been a great performance horse.  My current performance horse that has had a successful career as an NCHA cutter and a team sorter before I bought him has a sworl very high above his eyes in the center of his face.  He also has multiple sworls… Read more »

Thanks for all your feedback. Maybe we can think about horses with multiple sworls as being more reactive and less intractable?

Hmm. Perhaps. I wonder if this particular horse was a bit intractable during his early training, but I don’t see any signs of this. So – I’ll go with more reactive.